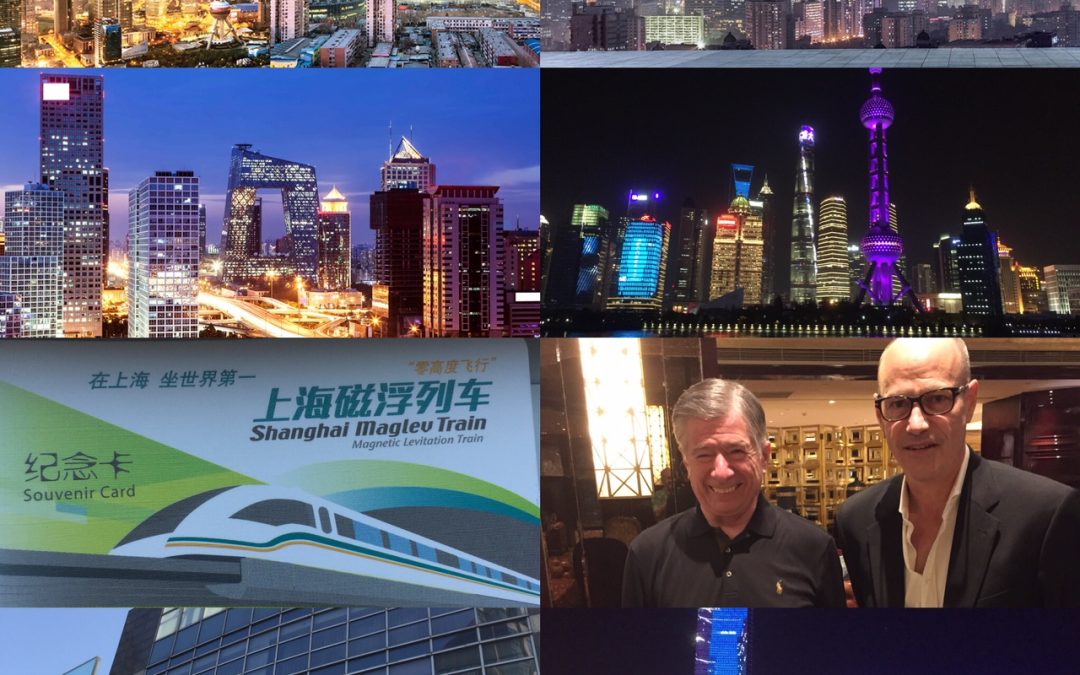 1) China currently has a population of 1.4 billion people – about 4.3 times that of the United States
2) There are over 160 cities over 1 million in population
3) The land area is approximately the same as the U.S.
4) Approximate populations of some major cities visited: Shanghai – 24 million; Beijing – 22 million; Suzhou – 11 million and Hangzhou – 9 million
5) Commercial real estate operates approximately the same with the main difference that the government owns the underlying land.
6) China’s main cities have numerous skyscrapers such as in Shanghai, Beijing, Suzhou and Hangzhou and look like downtown Chicago – equal to or doubled or tripled.
7) There is a tremendous amount of high rise multifamily – many around 25 stories. One can go for miles and miles and see 100’s if not 1000’s of high rises including numerous cranes.
8) There appears to be good public transportation. Trains can travel fast – one up to almost 300 miles per hour.
9) There appears to be little parking decks with most parking underneath the buildings.
10) China appears to be the fastest growing power in the world. Technology is great. China has a rapidly maturing economy. China now leads the world in electric vehicle sales. In 2017, 2.3 million luxury vehicles have been sold in China.
11) China roads and infrastructure are very well done – freeways in good condition, well landscaped and very clean (no trash); very little reconstruction – no orange barrels
12) China infrastructure, although in good condition, is inadequate due to the quickly increasing population
13) The roads are overloaded with cars causing slow traffic in the major cities;
14) The government tries to limit cars by charging an extremely high registration fee – sometimes around half the cost of a car itself; in addition, they limit cars on certain days based on the numbers on their license plates.
15) China cleans its many cities at 2 a.m.; much of the population is very tidy.
16) Chinese retire at an early age to allow the younger generation to get employment – 55 years old for men and 50 years old for women
17) There still Is bias in male versus female; males typically will get a better education
18) There appears to be the very rich with a shrinking middle class.
19) Politics appears to be very controlled – if something is a potential problem, they deal with it. An example is the Chinese shut down Google, gmail, Facebook, etc in China because some factions were using it for inappropriate purposes. China doesn’t appear to have a strong negative news media like the U.S. against those in power – a great advantage to China’s President XI Jinping versus the U.S. or other leaders that need to combat the negative news media and opposition parties daily.
20) Chairman Mao who died in 1976 is still highly revered – thousands go by his grave daily in Tian An Men square area. His photo is still prominently displayed in the square. His photo is on their currency.
21) China appears to be primarily irreligious or folk religion. Folk religion is where government officials and common people of China share religious practices and beliefs, including veneration of forces of nature and ancestors, exorcism of harmful forces, and a belief in the rational order of nature which can be influenced by human beings and their rulers. Christianity appears to be 2-3% with very few churches observed. Buddhism is about 15%. The government now does recognize five religions – Buddhism, Taoism, Islam, Protestantism and Catholicism.
22) Crime seems to be well controlled. Almost the entire population does not have guns – only police. Very little police presence was observed.
23) Although China has given up on its one child policy, it is so expensive to have a child that not many families go beyond one child. One child causes other social issues – ability to share, etc
24) Drinking water should be out of a bottle – both for foreigners and residents. Tap water can be used for non-drinking purposes.
25) Many Chinese still have a great animosity to the Japanese due to what the Japanese did to them in World War II.
26) There is a tremendous amount of history going back 1000’s of years especially in the Beijing area – Great Wall, palaces, temples, gardens, tombs, bazaars, dynasties, imperial families, etc The Great Wall was built 2700 years ago on top of mountains, is over 4000 miles long, 25 feet high and 21 feet wide. The Grand Canal is 1100 miles long and built 1300 years ago.
27) There is tremendous amount of long established businesses still thriving over 1000’s of years – jade, tea, silk, pearls, embroidery, health, etc
28) Concepts like feng shui are still being used.
29) At the current pace, it appears that China will emerge as the global economic leader of the coming decades.

If you have questions on China, feel free to call. We can provide you with information from our own SVN commercial real estate and corporate office/contacts in China and any local/U.S. contacts whichever is appropriate.